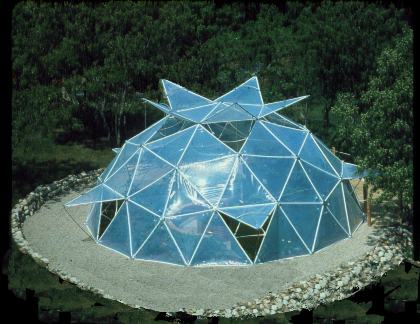 A dome is an element of architecture that resembles the hollow upper half of a sphere. Dome structures made of various materials have a long architectural lineage extending into prehistory.

Corbel domes and true domes have been found in the ancient Middle East in modest buildings and tombs. The construction of the first technically advanced true domes began in the Roman Architectural Revolution,[1] when they were frequently used by the Romans to shape large interior spaces of temples and public buildings, such as the Pantheon. This tradition continued unabated after the adoption of Christianity in the Byzantine (East Roman) religious and secular architecture, culminating in the revolutionary pendentive dome of the 6th-century church Hagia Sophia. Squinches, the technique of making a transition from a square shaped room to a circular dome, was most likely invented by the ancient Persians. The Sassanid Empire initiated the construction of the first large-scale domes in Persia, with such royal buildings as the Palace of Ardashir, Sarvestan and Ghal’eh Dokhtar. With the Muslim conquest of Greek-Roman Syria, the Byzantine architectural style became a major influence on Muslim societies. Indeed the use of domes as a feature of Islamic architecture has gotten its roots from Roman Greater-Syria (see Dome of the Rock).

Established in the Mid 1990’s, Four M Enterprises has been continually bringing innovative products to the building industry of Pakistan. We are Pioneers in introducing novel products such as a complete line of products including fabrication, ranging from Poly carbonate sheets Hollow sheets, Flat sheets, Solid sheet, shutter wall sheet, Diffusion sheet. We carry good quality products & provided best services to meet our customer's requirements and are always keen to introduce innovative products to the market.